Pura Vida is the Costa Rican expression for Pure Life, like Shalom and Hakuna Matata.

Over the years I have had to endure hours of other people’s vacation stories. Boring, laborious stories of their “funny” adventures and “witty” tales from far off lands. I pretend to enjoy their endless slide shows while they drone on and on. And now it’s my turn!

Over the summer we (sans Huey who was still away working as a camp counselor), all went to Costa Rica. It’s wonderful, everything you can imagine. A living, breathing post card. 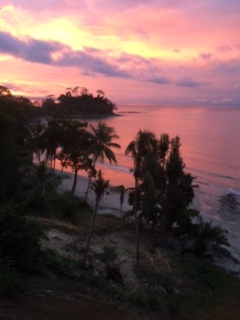 It had been years since we had traveled and short of updating our passports I hadn’t prepared a thing. It wasn’t until we arrived at our Airbnb right on the beach and only miles from the rain forest, that I began to plot our adventures. There was one serious problem… very few people speak English. And frankly why should they? The problem was I didn’t speak a word of Spanish. 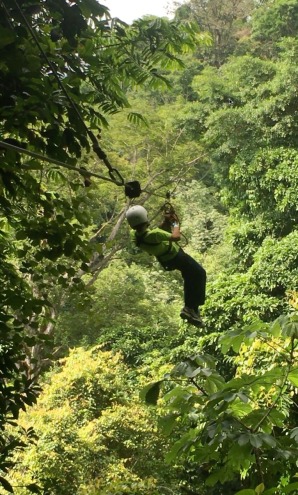 It should be called Zippy’s Monkey Ride because that’s basically what you are doing. Flying through the air at 40 mph over the tree tops, fresh green leaves slapping across your face, with only your own palm to stop you from smashing into a lightly padded Tarzan-style tree.

“Too fasto.” I declared.

Zen-like words to live by.

Why is it that Americans think if we simply add an “o” to a word suddenly we are fluent in Spanish?

As we were leaving we were approached by a local, “would you like to go on a night walk? Tonight is perfect no moon. You are already prepared in long pants, closed shoes that will protect you from snakes, and scorpions.”

“Mom, you’re not actually thinking…” They looked at me in terror.

We piled into an unmarked van, headed down a deserted road and were dropped off with our guide at a deserted nature site.

“I wouldn’t go there if I were you…” Said that voice inside my head. Crazy talk.

It was so dark you couldn’t see your own hand in front of your own face. Equipped with small flash lights and a black light we went in.

“I DO NOT want to see a scorpion.” Daisy declared.

“Oh but you must, they glow in the dark. But careful they are very poisonous if you are allergic. you could die in seconds.”

Dewy tilted his head, “How do you know if you are allergic?”

“Only way is to get bitten.”

We followed our guide closely as he revealed a spectacular world filled with fire flies and gigantic leaf cutting ants. He rubbed the belly of a huge bull frog that barked wildly. A spider monkey heeded the call and began screeching like Paul Revere, “The humans are coming, the humans are coming!”

When it was all over we glowed in the dark with excitement all the way back to our Airbnb.

“What was your favorite part?”

“And the hollering monkey.”

Dewy smiled, “mine was seeing the scorpion.” 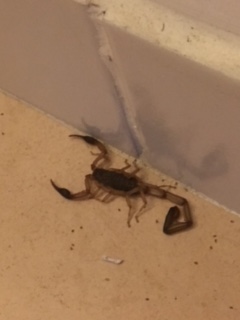 “But we never saw a scorpion.”

“We can now.” He pointed to the floor.

“Aaaahhh!” Daisy screamed in a panic as only a 12-year-old girl can. “What if I’m allergic?”

“My prayers would be answered,” Dewy snidely grinned.

Gingerly he took a broom and scooped him outside where he could glow in peace.

Unable to snapchat, as we were void of internet, Daisy was forced to live chat with us. “I almost died.”

Once her panic subsided I heard Daisy and Dewy talking.

“I figured it out.” Dewy said.

“I think Mom’s trying to kill Dad. How else do you explain the zip line of death, a night hike with a stranger in a deserted nature area filled with poisonous snakes. Oh and, the

killer scorpion just shows up in our house? C’mon how long do you think it would take for them to find his body? A long time. You know she wants to see the crocodiles.”

Mmmmm, I better watch out, people have been put away with less circumstantial evidence.

The country is known for its beautiful wood working. At every little shop in town there were bowls and cutting boards including incense burning devices carved in the shape of a “pene” en Espanole. They were everywhere. My children were horrified at the public display of wood. I found it hilarious.

to San Jose and the aeroporto. But not unlike any other city, by 6:30 rush hour had come in with a vengeance. Horns honking, bumper to bumper cars. A stark contrast to where we had been and a reminder to where we were going.

“Dad, there is a sign that said Aeroporto exit.” Dewy said pointing out the window.

Swept up in the rushing current of traffic we suddenly found ourselves off the highway and in the city.

“What do the directions say?”

“Go to the round about.”

Tic toc! Our flight leaves at 8:30 and we were lost in a foreign country.

“We can’t miss this flight. It’s the only one to Los Angeles.”

“There’s only one flight?”

“WHERE IS THAT DAMN AIRPORT?”

My head was spinning while we spun around in a vicious circle, round and round the round-about.

There were no signs and even if there were we couldn’t read them. And the worst thing is I didn’t have access to Siri, or even Maria. Nothing! Back to basics I thought. “Go into that gas station pronto.”

The attendant showed us the way on an old fashion paper map. We were back in business.

It was 8:00. We made it! Dumped the car at Hertz and ran thru the empty airport to the ticket counter.

Within minutes we had our boarding passes and were taking our shoes off for security. We were going to make it. I dumped my bag of toiletries into the large gray tub.

“You need to put that in a plastic bag,” said the armed Costa Rican TSA guard.

“Plastic bag or trash. You can buy a bag at gift shop.”

Benjie and the kids had already made it through unscathed. “C’mon c’mon!”

I reviewed the contents. I was not about to throw away my $100 money back guaranteed Christy Brinkley face cream. I gathered everything up and began to run back to the gift shop.

“Where are you going. It’s this way,” Benjie shouted.

killing one’s spouse was not wasted on me). I grabbed a plastic bag, tossed down a million Colones, threw my cream in the bag and turned to run back though the empty security. In the time it took to rescue Christy Brinkley, an entire camp of soccer kids arrived and filled in the entire security area wearing cute multi-colored uniforms and color coordinated backpacks.

”Pardon me.” I elbowed my way before standing in front of the security officer waving my face lift in a baggy.

We were the last ones on the plane, but at least we got on.

Being back on our home soil felt good. Get by Customs and Uber home.

“Do you have anything to declare?”

This was unexpected. He didn’t ask Benjie or the kids. The officer stared me down.

“I do declare its good to be home.”

He didn’t even bat an eye. This was awkward. I did have something to declare but certainly not in front of everyone.

Nothing. In a hushed tone, “I’d rather not show you, not here in front of the children.”

He gave me a deadpan stare.

I pulled out the wood box and placed it on the counter.

“You mean my Package? My junk in the box? You can call me Johnson. Or you could call me…; Cock a doodle do; Guess the ball is in your court; Say hello to my little friend.”

“Either I see what you have to declare or I’ll have you detained.”

He whispered into his shoulder walky-talky.

There was an audible gasp from the crowd.

“Dad let’s just go and leave her behind. It’s best for all of us.” Dewy pushed him.

The officer talked to his arm again, “never mind.” Then he looked back at me. “You bought local souvenir folk art?”

I had missed Huey not being on vacation with us. I wanted him to know we were thinking about him so I sent him souvenir folk art. 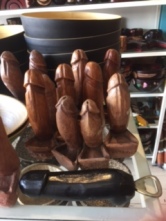 A few days later I got a text, “WTF MOM WHAT IS WRONG WITH YOU? There are kids here. it’s a YMCA camp for young kids!”

I guess I didn’t think it through!

Till next time live with waffletude-o