Skip to content
HomeSee Something…Put Your Foot In Your Mouth

Waiting for the plane to take off from Chicago, I couldn’t help but notice the man seated next to me was extremely anxious. He seemed agitated, nervous, fidgeting, sighing, groaning. At one point he dropped his head into the palms of his hands, already wrung dry as if some horrific tragedy was about to befall him.

Now, I know some people are scared to death to fly, the whole idea of possibly falling through the sky for thousands of feet in a fiery ball can be quite unnerving. But this felt different. 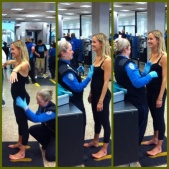 I love to fly. Although, when it comes to the TSA, no matter what, I’m always the one pulled aside, buzzers going off, getting patted down, caught carrying too many ounces of liquid. And really, is taking our shoes off necessary? I hate that part the most because no matter what style of shoes you remove, you can never get them back on your feet. Clumsily, I stumble and fall, all because Richard Colvin Reid tried to put a bomb in his shoe back in 2001

I felt terrible for this man seated next to me since he was in obvious distress. Normally I would have reached out to help him, maybe even put my arm around him and said something like, “is this your first time flying? Don’t let the loud rumbling sound scare you. My daughter gets sick and throws up every time she’s on a plane. Is that what’s bothering you?”

I was just about to reach out when a hateful voice popped inside my head. No, no, no! I am not that kind of person. I believe ethnic profiling is despicable. And yet… those thoughts were there and I couldn’t stop them. What was I thinking? You see this man was of middle-eastern descent.

Its always people like me who don’t want to offend anyone who afterwards go up to the police. “I thought it was funny that he was dressed like Poncho Villa

going into battle with belts of bullets strapped to his body screaming, ‘stay back!’”

What if he is nervous because he has a bomb? I would never think this if a surfer dude was sweating next to me. I gave him the evil eye. Wait, did he just glare at me? Something was up. “See something, Say something!”

I went into action. I was in 6th grade all over again… I was Harriet the Spy. From inside my backpack I pulled out my red spy journal that I keep to record everything I see. I began to take notes. Did he carry on any baggage? Does he smell like chemicals? What is that aftershave?

Now what? He was whispering in Arabic or Farsi or something on his cell phone. I tucked my head against the window and whispered into my Apple watch, “Siri, what is he saying?” Then extended my arm out.

“I’m sorry Agent 99. I don’t believe he is speaking Arabic. Do you mean aerobic?”

I looked at him. He looked at me suspiciously. We both put our devices on airplane mode while the airplane went into flying mode. The man relaxed, leaned back and closed his eyes, but I was still going to keep an eye on him. I nestled into my seat and pulled out my credit card and began to scour for food and entertainment.

The newest James Bond movie, Spectre, was available. A movie, cheese and crackers and a wine, oh make it 2, well 3 wines and I’m ready to relax for the next few hours.

But when I went to place my order my credit card would not slide through. It kept getting snagged in the sliding process. In other words it wasn’t a clean swipe. I kept trying rapidly back and forth, back and forth.

I flagged down a flight attendant. “I’m so sorry but there is something wrong with this little machine. My credit card keeps getting stuck.”

“Do you have the magnetic strip facing out as it clearly states in the diagram?”

I flipped the card around so that the magnetic strip was facing properly.

“Oh. Thanks you. Problem solved.”

It wasn’t that clear. It’s always in the details.

Zing! The sliding was so smooth that the damn card flew right out of my grasp, landing somewhere between his seat and mine. I could hear it bounce around before landing in the abyss. Shit!

Well I wasn’t about to wake him up. I don’t think it’s a good idea to jostle a suspected bomber on a plane. I jotted it down in my spy journal. So there I sat watching James Bond on my tiny screen, drinking my wine from a tiny bottle placing it on my tiny table. I was starting to feel like Alice in Wonderland.

Watching the movie, I was constantly reminded that my credit card, worse my company credit card, was gone. It was a company card so I couldn’t very well just ignore the fact that it was missing. I tried to be inconspicuous while I looked over at the man still with his eyes closed.

Suddenly he jerked up and climbed over the woman in the end seat and walked up the aisle. Brilliant. I instantly went into action. Tray table up to the upright position; unbuckled my seat belt and bent over to scrounge around. Maybe I got lucky and it fell inside my purse. No. I bent farther down and began rubbing my hand over the disgusting carpet.

I have close friends who are flight attendants so I know what goes on on a plane. I know that people bring their dogs on planes now. I can only imagine what happens when Brigitte BarDog has an accident, and where they have it.

You can bring any species of animal on the plane now. George Clooney had a pet pig. Do

you think they would say no to George Clooney if he wanted to bring his pet pig on board? I could be rubbing my hand in George Clooney’s pet pig’s feces right now for all I know.

Or snakes. Let’s not even get started about snakes on a plane. Time was running out. How long was this terrorist going to be gone? I was all the way down on my knees, butt up, where could it have gone?

That’s when it dawned on me. The only things missing from this scenario was the terrorist and his shoes. Oh my God! Not the shoes! I unfolded my body and pulled myself back up into my seat just as he was returning. This could put him over the edge. Don’t the Hindus have strong beliefs about their feet and what touches them?

Can you imagine if he got home and tried to explain this to his wife?

“No honey I have no idea how a woman’s credit card ended up inside my shoe?”

Good luck with that!

He looked at me with his eyebrows pressed together.

“Yes um, there’s something in your shoe.”

“Yes, not like a bomb in your shoe or anything like that. I would never think of you having a bomb even though clearly you are from that part of the world that put bombs in their shoes all the time. But I’m sure you’re not one of those kind of terrorist.”

He didn’t say a word just let me continue rambling on. Although he did stare at me with concern. Did this silly American woman put something in my shoe? Is she a terrorist? Is she going to frame me for a crime? Maybe she is a Bond Girl? (Hey it could happen.)

“Your business card? Are you a prostitute?” he asked now much more worried.

“No nothing like that. My business credit card must have fallen into your shoe.”

“You put your credit card in my shoe and now you want it back?”

“Well not on purpose.”

He slipped his shoe off and needless to say his feet were a bit ripe. Do they eat a lot of garlic there? Sure enough there it was! Still questioning how my card got inside his shoe like a Harry Potter trick he reached down and handed it over. There was some kind of condensation on it.

“Thank you.” I smiled. I jotted it down. And we finished the flight in silence.

Of course later when we were waiting at the baggage claim, he was greeted by his lovely wife and a couple of kids. A boy and a girl.

“Are you okay dear, I know how you hate to fly.”

“Fine.” I overheard him say.

He gathered up his family with haste and moved to the other corner and began speaking in his native language.

His wife kept pointing suspiciously at me and pushing on him, “See something, Say something…”

Hmmmm. It would appear the shoe was on the other foot.

Until next time, Live with Waffletude.

5 thoughts on “See Something…Put Your Foot In Your Mouth”