What is it about this love affair we have with our cars? We care for our cars as if they were living beings, not machines with horse power. We remember our first car, our first kiss in our first car. Cars define who we are, or who we want to be. You can tell a lot about a person by the car they drive.

Seven years ago my husband, Benjie, decided to dabble in the “green” driving world and bought a Prius. 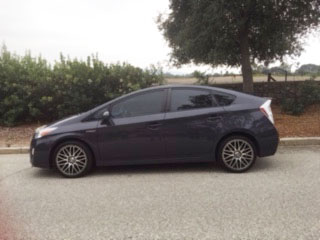 As pedestrian as it might have seemed to him, it was better than walking. Alas it’s not easy being green when your heart longs for a gas guzzling sports car. As a compromise, he  did get special wheels; Wheels that cost as much as my car. “You will always tell m

y Prius from all the rest because of those wheels.” For him these sporty wheels made the difference between a Gremlin and a Ferrari. For me it was more like putting lipstick on a pig, although let’s face it, shoes do make the outfit.  We named our Prius Hermes after the Greek God, protector of land travelers, known for wearing winged sandals.

With every car there is a favorite car story. So in homage to that Prius with the fancy wheels here’s our story. 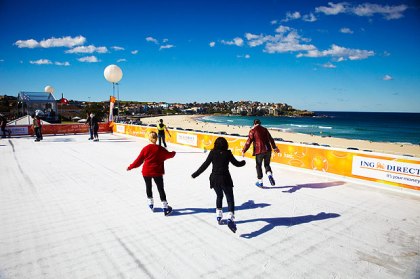 It all started when I read about an ice skating rink set up on the beach. Perfect. We crammed all five of us into Hermes, the Prius, and drove down to the shore. The setting was beautiful. The ocean breeze was in my face, my arms were spread like I was a bird in flight… and then, I wasn’t.

A newby-kid skater cut right in front of me and I went splat like bird poop on a windshield. 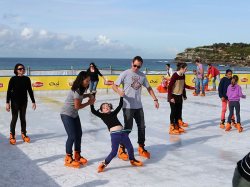 My wrist took the blunt of my fall. I hid the pain and kept on skating. Why? Because I’m a Mom, not a mere mortal. I have super powers like x-ray vision. I can see thru all sorts of crap. C’mon, I can grow humans in my belly!

The day ended and we skated off into the sunset. By now my wrist was in the kind of pain that makes you want to barf. It was so swollen I had to remove the paper wristband from the rink with my teeth because it was cutting off my circulation.

“I need ice.” I whispered to Benjie.

“OH MY GOD!” he exclaimed looking at my plump arm. The gig was up. We went to 7-11 and bought a 10 pound bag of ice and a bunch of plastic bags. I swished down two Aleve with a cold beer and wrapped my arm in ice.  Just get me home. Just get me home!

Hermes was going at a good clip, around 80 mph when suddenly there was a loud clap noise. Did our lucky horseshoe just fly off?

“I think we’ve got a flat tire.” Benjie announced.

With the finesse of Capt. Sully Sullenberger landing his plane on the Hudson, Benjie navigated Hermes across 6 lanes of treacherous traffic on the Golden State Freeway, cars flying on either side to avoid this limping pony until we finally made it to rest on the narrow strip of shoulder.

We were sitting ducks, prime pickings for any hair brain teenager or drunk driver. 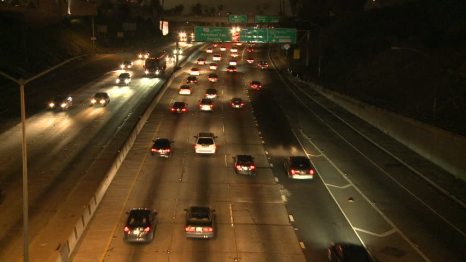 Benjie tried to open his door, but the current of traffic was too strong. “EVERYBODY CALM DOWN, I’M CALLING THE AUTO CLUB!!!”

“Let’s play a game.” I said changing the subject.

“How about Charades?” Daisy suggested.

“Charades? How are we going to play charades in the car?” Dewey protested.

A truck rumbled by and shook Hermes like a bucking bronco. “AAAhhh!”

I rolled my eyes, “Benjie get a hold of yourself! Charades it is. Who am I?” I flapped my one good arm and made a kissing motion.

“That clown fish.” Benjie burst out. 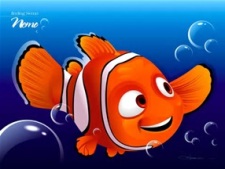 “Right! What’s all that flashing? Daisy who are texting?”

“I’m in a group text, saying good-bye to all my friends. And they’re texting me back that they love me and will miss me.”

Dewy looked confused, “Wait a minute. Why aren’t any of my friends texting me back?”

Daisy said, “Sucks to be you. Guess who I am.” She started her clue by making a stabbing motion then gnawing on her arm.

“The guy from Psycho.” Huey said.

“Clarice…” Benjie said in a Hannibal Lecter voice that gave me chills.

“Stop clowning around!” I barked.

“John Wayne Gacy?” Huey said.
“No that was the pedophile who dressed up as a clown then killed little kids.” I told him. 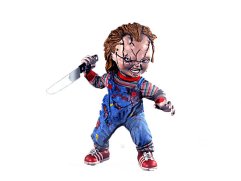 The windows were starting to fog up.

“No! Jeffrey Dahmer. Didn’t he stab people then eat them?” Daisy had given up on us.

“No, oh wait maybe he was I don’t remember.” I answered.

Suddenly there was a tapping on the outside of my window. I glanced over and was face to face with a man in a uniform looking in.” “AAAHHH!”

I felt bad afterwards scaring this lovely highway patrolman, so much so that he jumped back and almost toppled over the guard railing. Once he collected himself, “Excuse me. Are you folks okay?”

Benjie beamed, “See I told you.”

“I’ll stay parked behind you until the auto club shows up.”

We all sat very quietly. All we could hear was the mad crazy clicking of Daisy’s nails on her phone. Then, in a whispered tone, “Yes, I know! I thought for sure it was Jeffrey Dahmer coming to kill us and eat us.”

“Is that our tow truck over there?” Dewey was pointing across the freeway to a tow truck stopped on the freeway heading south. We were heading north. The cell phone rang.

“Yes the guy with the Prius. No you idiot, we’re over here. See I’m flashing my lights.”

Within a few minutes the Cavalry arrived behind us, rumbling loudly. 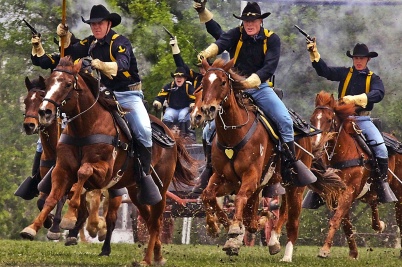 I realized what a privilege movement is, especially when it’s been taken away. Hermes couldn’t move, I couldn’t move my arm and Benjie couldn’t move to get out. I was just waiting for someone to call out they had to pee.

“Dad, Dad I’ve got this.” Huey my heroic teenage son climbed over his two siblings and got out of the car. He opened the back hatch and began handing me the stuff.

“Ouch!” Just that little movement sent daggers through my arm. “Sorry honey you are gonna have to put them over there.”

I was useless. Huey proceeded to throw our luggage, souvenir bags, stuffed animals everything including my brand new Gucci knock off bag onto the interstate.

“You have the tool?” The driver shouted through the car.

“There’s a special tool you need to unlock your special wheels. It’s usually in your glove box.”

“There’s a tool?” I said, but you know what I was thinking… you better have that freaking tool for your freaking wheels if you ever want to use your tool again!

We tore the car apart… He did not have any tool.

“I guarantee you don’t need a tool,” Benjie barked at the man who changes tires for a living.

“Nope you need a tool for these wheels. Can’t change a tire without it. I gotta call another truck and have you towed.”

TOWED!? You’ve got to be kidding me. They shoot horses don’t they?

Dewey had to climb back over his siblings who were not about to give up their spots and sit closer to the freeway side of death.

The second tow truck arrived. “Nice wheels. Too bad you don’t have the tool.”

The officer set Benjie free and we all climbed inside the cab of this new, beautiful flatbed tow truck. We watched him hoist this Prius with the exceptional winged wheels onto the flatbed. It was a $250 Auto-Uber ride.

“This is nicer than our car.”Daisy said.

“No kidding. He must not have kids.”

Sadly, unlike Greek Gods, a Prius does not last forever. Two months later the ticking time bomb battery had run out of time, and we traded Hermes in for a Honda, with sensible wheels.